New Enterprise Limestone Quarry posted their land recently from Limestone Road to the Pemberton Bridge. Apparently this is a new policy for all NE lands throughout the state and is not specific to the area surrounding the Little J and, to our knowledge, was not precipitated by events at the Pemberton location. We have contacted the NES&L and we are meeting with their management next Tuesday (Dec 5th) to discuss options to increase angler access.  LJRA will do everything possible to reverse this loss of access on the river.  A priority of the LJRA is to increase angler access and improve landowner relations.  In the meantime, it is important to respect NE’s wishes that no one trespasses on the land.  The LJRA has had a good relationship with NE, due in part to our cleaning up their land along the J for 12 years during the annual riverbank clean up.  Check  the website for updates.

The LJRA will meet on  Thursday November 9th,  at 7:00PM at the Edgewater Inn.

Due to delays in obtaining the permit required to do the work, the Kelso Run project must be delayed until the Spring.  Work cannot be performed during the Fall spawn in order to protect the brook trout.

LJRA received a $5,000 Western Pennsylvania Environmental Award for excellence in advancing the environmental quality of western Pennsylvania. We thank Celina Seftas, District Manager of the Huntingdon County Conservation District, for encouraging us to apply for this award and help with the application.  The monies will be applied to ongoing conservation and water monitoring projects.
The following  video was produced by Pennsylvania Environmental Council to describe the activities of the LJRA.
This and other videos can be found on the About the LJRA page.

More great news for the J!

The LJRA is excited to announce that as a result of the June electroshocking survey (scroll down to the next page), PFBC will recommend that two sections of the J be classified as a wild Class A fishery. Being declared a wild Class A fishery is an important step towards gaining high quality cold water (HQCW) designated use status by PA-DEP.  One location encompasses 4.5 miles of the upper J from Sandy Run to the Rt 220 bridge in Bellwood.  The other 3.2 mile section is located on the lower J from the Barre bridge to the mouth of the Juniata River. 2016 has been an excellent year for the J!

In Memory of Dan Grobe 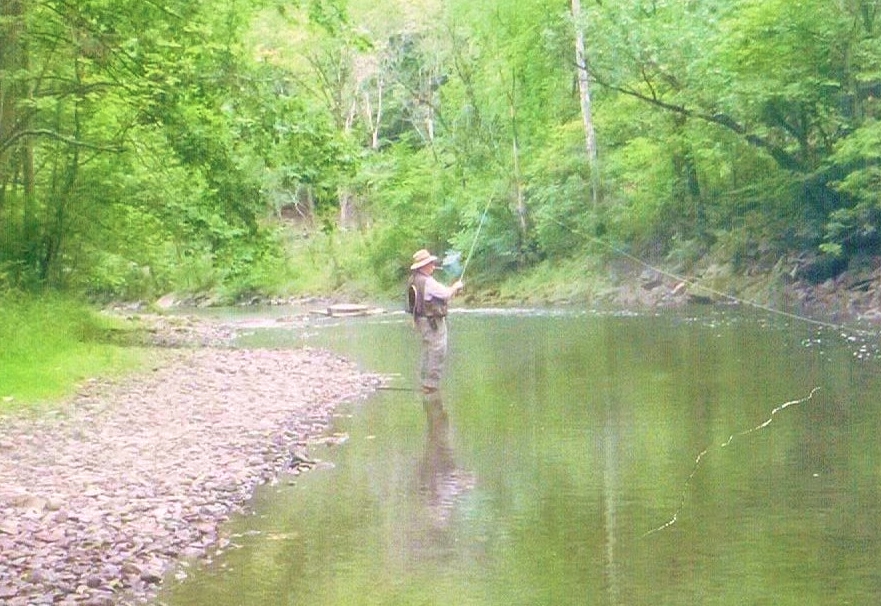 Dan Grobe loved fly fishing the Little J. His family and friends have made donations to the Little Juniata River Association in his memory. Here is a photo of Dan taken near the “Road Springs” last spring.

This site on the banks of the upper “J” was covered with junk from an auto salvage operation. LJRA worked with the legitimate landowner, First Energy, to get it cleared. We give our thanks to First Energy/Penelec for finally getting this done! This should greatly reduce the washing of tires and other auto-associated trash into the J during high water events.

The Little Juniata River is 32 miles in length. It starts in the city limits of Altoona with the confluence of Spring Run and Kettle Creek, flows north to Tyrone, then east to the confluence near Alexandria. Of these miles,. All but a few miles,including Rothrock state forest, are privately owned. (LJRA has secured 4 miles of permanent public access on prime water by paying landowners for easements). Keeping good relations with these private landowners is a major priority for LJRA as it should be for all who wish to have access to this resource. Please respect the landowners rights ! If you see someone damaging signs or dumping trash, take down the license plate and report them immediately to law enforcement. Or report them to the LJRA leadership (we’ll take it to the Water Conservation Officer for prosecution). If you see a violation call 911 or 814 684 5922

We are pleased that Kris Kuhn, Fisheries Manager for the south central district, and his PFBC crew  electroshock surveyed two 300 meter stretches of the upper J between Bellwood and Tyrone (upstream from the DHALO) on June 10th. Large numbers of brown trout were found at both both locations. (During the survey they captured one of our telemetry study fish -see picture below).

Observers, including  LJRA officers, are hopeful that, once the results are totaled, more than a Class A population will have been found at both locations. Being declared a wild Class A fishery is a requirement for gaining high quality cold water (HQCW) Designated Use and the added protection that follows this designation by PADEP. Adding this very significant section of the upper J to HQCW designated use list is one big step forward towards meeting the LJRA  goal of obtaining HQCW designation for the entire river.

These observations,  together with the increasing presence of pollution intolerant mayflies and stoneflies throughout the river, are very exciting developments indeed!

If history is any predictor, Grannom caddis will start emergence within 3 days. In 2012 red buds accurately showed on March 21st. The first fishable hatch of grannoms came on March 23rd. Last year the red buds were late (April 16th) and so were the grannoms. They came on high water April 18th. and were not very fishable. I have tracked this relationship for many seasons….get your dries ready.

Grannoms updates moved to the forum. We are looking for patterns to post in the fly tying sections- JCR